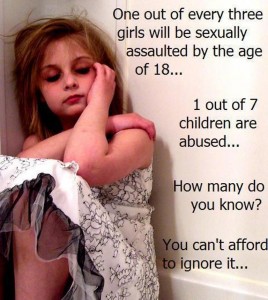 Definitions   Childhood sexual abuse can be defined as any exposure to sexual acts imposed on children who inherently lack the emotional, maturational, and cognitive development to understand or to consent to such acts. These acts do not always involve sexual intercourse or physical force; rather, they involve manipulation and trickery. Authority and power enable the perpetrator to coerce the child into compliance. Characteristics and motivations of perpetrators of childhood sexual abuse vary: some may act out sexually to exert dominance over another individual; others may initiate the abuse for their own sexual gratification (5, 6).

Syndrome
Although there is no single syndrome that is universally present in adult survivors of childhood sexual abuse, there is an extensive body of research that documents adverse short- and long-term effects of such abuse. To appropriately treat and manage survivors of CSA, it is useful to understand that survivors’ symptoms or behavioral sequelae often represent coping strategies employed in response to abnormal, traumatic events. These coping mechanisms are used for protection during the abuse or later to guard against feelings of overwhelming helplessness and terror. Although some of these coping strategies may eventually lead to health problems, if symptoms are evaluated outside their original context, survivors may be misdiagnosed or mislabeled (5).   Although responses to sexual abuse vary, there is remarkable consistency in mental health symptoms, especially depression and anxiety. These mental health symptoms may be found alone or more often in tandem with physical and behavioral symptoms. More extreme symptoms are associated with abuse onset at an early age, extended or frequent abuse, incest by a parent, or use of force (4). Responses may be mitigated by such factors as inherent resiliency or supportive responses from individuals who are important to the victim (4). Even without therapeutic intervention, some survivors maintain the outward appearance of being unaffected by their abuse. Most, however, [privately if not outwardly] experience pervasive and deleterious consequences (4).

The primary aftereffects of childhood sexual abuse have been divided into seven distinct, but overlapping categories (16):

Responses can be greatly variable and idiosyncratic within the seven categories. Also, survivors may fluctuate between being highly symptomatic and relatively symptom free. Health care providers should be aware that such variability is normal.

In addition to the psychological distress that may potentiate survivors’ symptoms, there is evidence that abuse may result in biophysical changes. For example, one study found that, after controlling for history of psychiatric disturbance, adult survivors had lowered thresholds for pain (13). It also has been suggested that chronic or traumatic stimulation (especially in the pelvic or abdominal region) heightens sensitivity, resulting in persistent pain such as abdominal and pelvic pain or other bowel symptoms (14, 15).

Prevalence
The prevalence of childhood sexual abuse in the United States is unknown. Because of the shame and stigma associated with abuse, many victims never disclose such experiences. Incest was once thought to be so rare that its occurrence was inconsequential. However, in the past 25 years there has been increased recognition that incest and other forms of childhood sexual abuse occur with alarming frequency (8). Researchers have found that victims come from all cultural, racial, and economic groups (9).   Current estimates of incest and other childhood sexual abuse range from 12% to 40% depending on settings and population. Most studies have found that among women, approximately 20% – or 1 in 5 – have experienced childhood sexual abuse (9). Consistent with this range, studies have revealed that:    Among girls who had sex before they were 13 years old, 22% reported that first sex was nonvoluntary (10).   Twelve percent of girls in grades 9 through 12 reported they had been sexually abused; 7% of girls in grades 5 through 8 also reported sexual abuse. Of all the girls who experienced sexual abuse, 65% reported the abuse occurred more than once, 57% reported the abuser was a family member, and 53% reported the abuse occurred at home (11).   Approximately 40% of the women surveyed in a primary care setting had experienced some form of childhood sexual contact; of those, 1 in 6 had been raped as a child (12).   A national telephone survey on violence against women conducted by the National Institute of Justice and the Centers for Disease Control and Prevention found that 18% of 8,000 women surveyed had experienced a completed or attempted rape at some time in their lives. Of this number, 22% were younger than 12 years and 32% were between 12 and 17 years old when they were first raped (9).